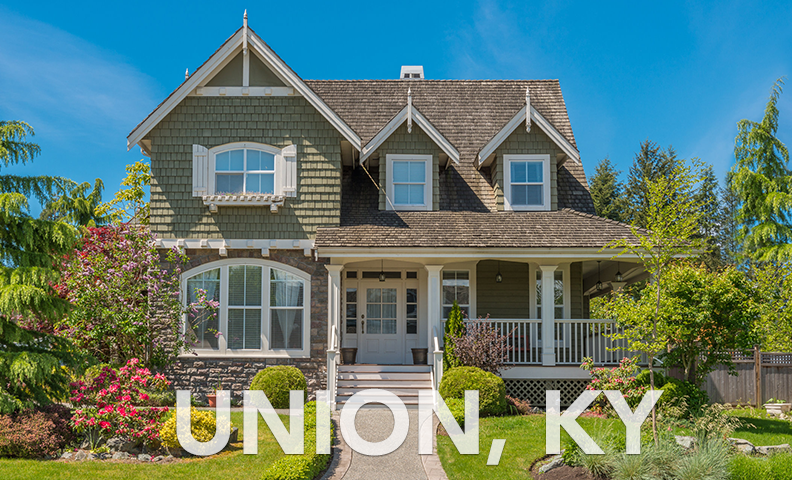 The beautiful City of Union is Boone County's second largest city with a 2012 population of 5,586. The City's population increased by 85% between 2000 and 2010. This time period coincided with the opening of U.S. 42 and the completion of a 3-school campus of Ryle High School, Gray Middle School, and Mann Elementary Schoo. The median household income in grew from $85,454 in 2000 to $100,623 in 2011. Further, 43% of the City’s population holds a college bachelor’s degree or higher. Union continues to be one of the top wealthiest and highly educated communities in Northern Kentucky. Since 2005, 1,525 housing units have been approved for construction within a one-half mile of the Union Town Center. Approximately 40% of these housing units have been constructed despite the slow economy. Coupled with the nearby residential neighborhoods like Farmview, Plantation Pointe, Orleans, Lassing Green, Cool Springs, Red Stone Village and Triple Crown, the Town Center is strategically located for a retail/office center.

Future residential development is planned west of the Town Center from Camp Ernst Road to Old Union Road between Longbranch Road and Hathaway Road. This could result in another 3,000 residential units providing more roof-tops for a much needed Town Center.

A word from our Mayor, Larry Soloman – “In Union, people have all the benefits of a small city with a lot of the country feeling. There’s a lot of open space. It makes for a great place to live,” he said. “That says we have something really special here, and our intent is to preserve that something special into the future.”

A new economic development committee, focused on revising and improving the town plan, is one of the things Solomon believes will keep the city as a top community. He said the committee is also working to ensure construction funds for the completion of Ky. 536 are in the state budget for the 2017-2018 fiscal year.
“We’re going to do whatever we can to bring more business to the city and help the city grow within the town plan,” Solomon said.

Take a leisurely drive around town and through the various neighborhood developments to witness all that Union has to offer.  It’s a wonderful place to call home!

Turfway Park – Live Thoroughbred racing late winter thru early spring.
Florence Freedom – Greater Cincinnati’s Minor League Baseball Team.
Kentucky Speedway – Whether you want to drive a stock car or your content to sit and watch as the pros do it, stock car racing is only minutes away.
Kings Florence Speedway – Car racing even closer to home!

The children attend Boone County Schools, which are consistently ranked near the top by the Kentucky Department of Education.